HALF MOON BAY — The San Mateo County Elections Office has certified the recall petitions for three members of the Coastside Fire Protection District, and an election will be held next year.

An elections official delivered the certifications to the board at its meeting Wednesday night in Half Moon Bay. The board will convene a special meeting Monday to decide when to hold the election.
A group of citizens collected a total of 9,983 signatures to recall board members Mike Alifano, Douglas Mackintosh and Gary Riddell over their push to sever ties with Cal Fire, which since 2008 has provided fire services for Half Moon Bay and several nearby coastal communities, and re-establish a local fire department. The three men argue the state fire agency has not lived up to its contract.
“These directors have spent over $170,000 on consultants trying to create a new stand-alone fire department and they have almost nothing to show for it,” said Marshall Ketchum, a leader of the recall campaign.
Alifano said Thursday he is looking forward to the recall election, which will pit the incumbents against a slate of fresh candidates.
“I’m excited that we’re going to have it,” Alifano said, “because I think we can finally put to bed (the issue of) Cal Fire versus a traditional fire department.”
Contact Aaron Kinney at 650-348-4357. Follow him at Twitter.com/kinneytimes. 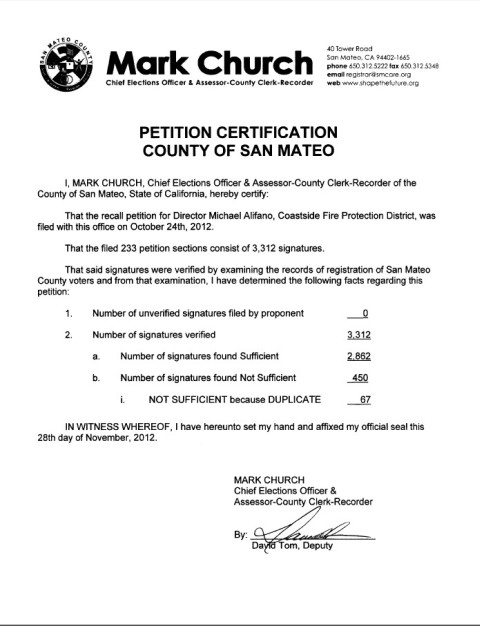 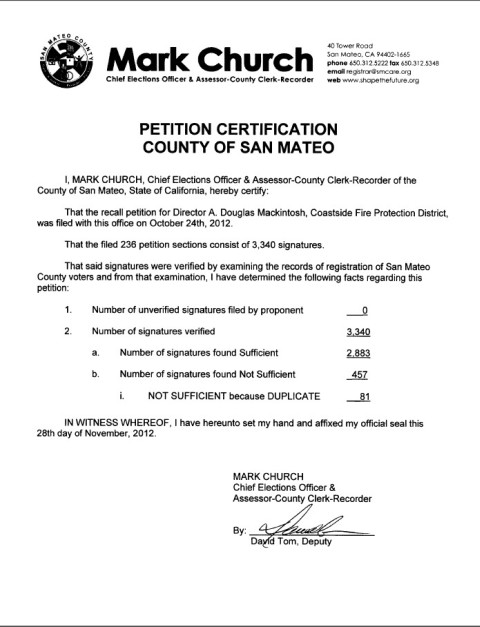